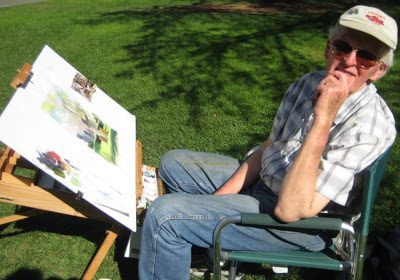 And then there is Dick’s daughter, Elizabeth Ann Brooks, the shining star in his glittering universe, his only biological child, the one who called him “My Poppers” and “Spider Legs”—because he walked so fast.

The loss of her father is so great, the void so gaping, Elizabeth has trouble reminiscing about him without dissolving into tears.

Dedicated to his art

“His life was dedicated to art,” said Elizabeth, who lives with her husband and daughter in Kirkland, WA. “It wasn’t work, it was the fabric of his being.”

The family moved to Redlands, where Dick’s junior high art teacher recognized his extraordinary talent, telling his mother that she was going to keep all of Dick’s drawings because he was bound to be famous one day. After graduating from Redlands High School (Class of 1945), Dick served as an air traffic controller, in the US Air Force, during the Berlin Airlift (1948-49).

He acquired an Associates of Arts degree at San Bernardino Valley Community College on the GI bill; graduated with honors from UCLA, and earned a BFA in advertising illustration from Art Center College of Design. During this time he boxed, played the saxophone and made the Junior Olympic Swim Team.

Before his hair turned gray in his late 30s, he had light brown hair and hazel/green-blue eyes, just like his daughter’s, and his voice always had a smile in it. 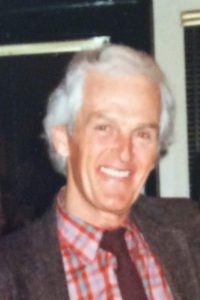 In 1956, Dick took his long, lean, good-natured self to New York, the mecca of the advertising world. Hired as an art director at Young & Rubicam, the most prestigious ad agency in the country, he acquired a taste for dry martinis and clothes.

These were the Mad Men years, and his first day on the job, his boss took him shopping at Brooks Brothers on Madison Avenue, advancing him the money to buy a couple of conservative gray suits for work. Honing his skills as a graphic artist and illustrator, he helped create magazine ads for DuPont Nylon and Dacron fibers. 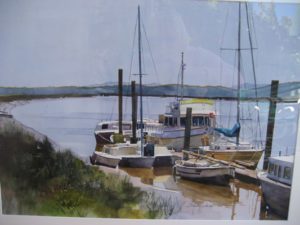 But Dick had left his heart in San Francisco, and five years later he transferred to the agency’s West Coast office. Wanting to be on his own, Dick and Primo Angeli, a noted graphic artist, cofounded the design firm, Cole & Angeli, with offices in San Francisco and Palo Alto. Their clients included Hewlett-Packard, IBM and Memorex.

Elizabeth remembers, as a child, walking with her Poppers around the Embarcadero, San Francisco’s waterfront, and everyone in the city seeming to know him. At times, he would burst into a little finger-snapping jazzy beat, quickening his pace.

According to his artist’s rep, Ann Koeffler, “All who were his friends savored his endless supply of stories, jokes, and ability to tell the unvarnished truth with relish. He traveled widely, painting a brilliant record of what he saw.”

Despite three marriages, Dick’s personal life remained spontaneous and upbeat. “He was a hopeless romantic,” his daughter said. “He loved his family dearly, and you always wanted Dick Cole at a party!” She rarely ever saw him angry or upset.

His first marriage to Sheila Croker Cole, Elizabeth’s mother, lasted ten years, until 1971. They parted when Elizabeth was two. Dick and his second wife, Margot Smith Cole, were together from 1971 until she passed away from bone cancer in 1991. His third wife Diane Noyes Cole died from terminal cancer in 2012. Dick was about 63 when he and Diane married, and he became utterly devoted to his step-kids, Eric, Sara and Greg Noyes.

Dick’s sense of humor was legendary. He was very quick-witted and could play off anyone or any conversation—even when the joke was on him. One of his favorite stories concerned a cake he ordered for Elizabeth’s 11th birthday. Since he and Sheila were divorced, Dick either helped with decorations or sent something special.

“At that time I loved carrot cake,” Elizabeth said, adding wryly, as long as it didn’t contain walnuts. “So, my Dad went into our favorite little bakery in Palo Alto and ordered a giant, sheet carrot cake. When they asked what verbiage was needed on the cake he told them, “Happy Birthday, Elizabeth.”

Almost out the door, Dick added, “Oh, and no nuts!”  The day of the party arrived, as did the cake, which said: “Happy Birthday Elizabeth. No Nuts.”

In the early 1970s, Dick sold his share of Cole Angeli to his partner and became a freelance illustrator, doing lots of work for textbook publishers, mostly pen and ink and some watercolors.

He moved to Sonoma in 1991, living first in Schellville, and then on the east side. After American Express hired him to paint a series of ads promoting various resorts, he started doing more watercolors.

Dick used to explain to his students how painting is all about the value of light to dark.

Elizabeth recalls watching her father work. “It was awesome,” she said. “He would talk me through the steps and why he did certain things. He was a terrific teacher.”

He also accepted commissions for portraits and always drew pencil sketches before starting to paint. A nationally recognized watercolorist, his extraordinary work resides in private and public collections from coast to coast.

“His creative side crept into other honed skills,” Elizabeth said. “He belonged to a local writing group and loved to write poetry, short stories and was even working on a screenplay! He was very smart, too smart at times, perhaps a bit of a smart ass!”

At home in Sonoma 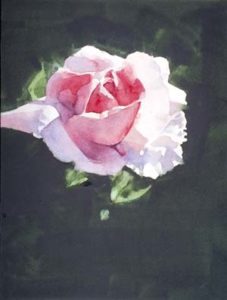 He was also an avid gardener, a true green thumb, and you could find him almost daily sitting in the cozy courtyard of his beautiful Sonoma home, soaking up the sunshine, surrounded by his flowers, fruit trees and his devoted dogs. He always carried wintergreen lifesavers and butterscotch candies in his pockets and loved solving the New York Times Crossword Puzzle.

He was a cofounding artist of Sonoma Plein Air; past board member of the Sonoma Valley Art Museum, and a Signature Member of American Watercolor Society. He won the Sonoma Plein Air 2009 Artists’ Choice Award; CWA National Charlotte Huntley Award 2005; Best of Show, California Watercolor Association National exhibition 2000, and was featured artist in International Artist Magazine 2006, and on and on.

He served as past president of Francisco Society of Illustrators, National Watercolor Society, and the California Watercolor Association.

He was predeceased by his much-loved wives Margot (nee Smith) and Diane (nee Wilkins) and his brother Louis Fillmore Cole. 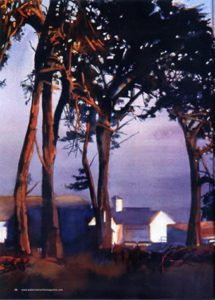 Dick was a strong supporter of Sonoma Plein Air Foundation, whose mission, for over 14 years, has been to ensure access of Sonoma Valley students to Arts Education.

His celebration of life is scheduled for 2017, in Sonoma, CA. Exact location/time and date TBD.