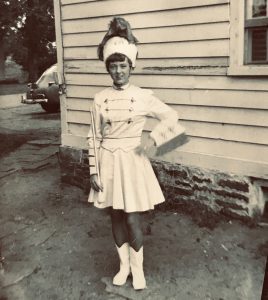 Alice Benson—a doting mom, excellent cook, and enthusiastic sports fan—passed away from a rare form of liver cancer on Saturday, Aug. 15th, in Goodyear, Arizona, her children at her side.

Frosted brown hair framing a gorgeous face in her younger days (as shown above), Alice relished life and never wasted a precious second. Whether diving into a swimming pool, preparing a gourmet dinner, or playing den mother to her two sons’ Boy Scout troops, she did it with flair and enthusiasm.

The first of five children, Alice was born Aug. 2, 1935 in Albany, New York to Theresa Rock Smythe and Francis Smythe. There followed two sisters Pat and Cathy, and two brothers, Jimmy and Allan.

The Love of her life 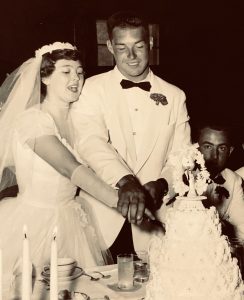 She attended Plattsburgh High School, where she twirled a baton as a majorette, and graduated in 1953. While at PHS, she met—in the truest sense—the love of her life, Wayne Benson. They married in a formal church wedding on June 4, 1955 and moved to a community called Cliff Haven on the shores of Lake Champlain in upstate New York. Wayne worked for Bell Atlantic, now Verizon.

Of all Alice’s many interests, cooking topped the list. She enjoyed trading recipes and trying new dishes. Sunday dinners were traditional, fabulous aromas permeating every room in the house. Holiday meals were begun three days in advance. Family favorites included chili, lasagna, ziti, and the Easter ham always ended up in a delicious split-pea soup.

Alice also found time to volunteer for the American Red Cross, the Cancer Society, the Heart Association, and the Republican Party, working at her local polling place every election day.

The Bensons were married for twenty-five years, until Wayne died in 1979. She never remarried.

In 1982, Alice moved to Goodyear, AZ to be closer to her children. After working six years as an office manager at Daniel’s Jewelers in Mesa, AZ, Alice joined the team at American Express as a collections specialist for high balance accounts, winning numerous awards and bonuses.

An avid sports fan throughout her life, she attended many events over the years. Notre Dame was by far her favorite football team. Not far behind were the New York Giants and Arizona Cardinals. When it came to baseball, it was the New York Yankees and Arizona Diamondbacks; the Phoenix Suns when it came to basketball. She knew her sports teams and would search ahead on weekends to find games on TV.

She was never idyll

A voracious reader, Alice made weekly trips to the library. Son Eric recalls her totting a huge bag of books: biographies of famous people, including presidents. She loved movies and would watch Dances with Wolves and Forrest Gump over and over. Never idle, she kept her hands busy knitting and crocheting. Those who received one of her beautiful afghans considered themselves blessed.

She adored the water and was a fish when it came to swimming pools, lakes, and the ocean. While in Arizona, she travelled to see sisters Pat and Cathy, in Albany, NY during the summer. They would spend a week on Lake George, or at the Jersey Shore, or Cape Cod. She also liked to jaunt to San Diego to visit a friend, David Wilson, and jet off on his boat.

But in February of 2020, her life changed. Alice tripped and fell at home and thought she had broken a rib. Eric took her to the emergency hospital. There, doctors determined she had a rare form of liver cancer. Chemo was out because the cancer had spread.

Alice suffered mightily at the end, a difficult time for all. Around 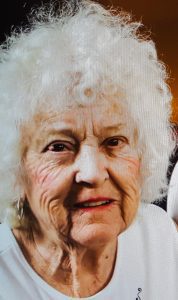 Aug. 11, she fell unconscious and remained so for four days. Eric said, “God was waiting for her and had plans. She needed to relinquish her physical body, the vessel holding her soul. That chapter was over, her book about to end.”

“I love you guys”

The three children were there on Aug. 15, when her eyes began to flutter.

Daughter Kelly said, “Mommy, we are all here with you.”

At that, Alice’s eyes opened fully and—although she couldn’t speak—the children were able to read her lips.

“I love you guys,” she managed. And then she closed her eyes forever.

Eric opened a window “so that her guardian angels could help her make a peaceful and safe transition.”

Alice is survived by three children, Kelly Benson and Wayne Benson of Sun City, AZ, and Eric Benson of Goodyear, AZ. Also her sister Cathy and husband Charles St. Lucia of Del Mar, NY. A number of first cousins, nieces, nephews, and two sisters-in-law. She was preceded in death by her husband Wayne; brothers Jimmy and Allan; sister Pat, and her parents.

To remember Alice, the family asks that friends buy a favorite tree and plant it where it can be seen often so as to keep her memory alive.

The family wishes to especially thank Wings of Hope Hospice for helping Alice, as well as the family.