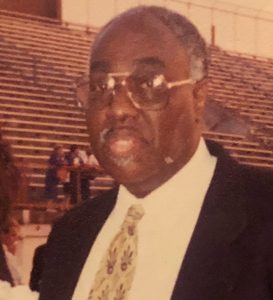 A sport’s enthusiast, he adored baseball, especially the Chicago Cubs, as well as Chicago Bears football, and Bulls basketball. Game shows and Judge Judy comprised his other TV watching.  Surprisingly, Josie got Bennie hooked on The Young and the Restless, and he was glued to the soap opera from then on.

He favored soul music, and Anita Baker and Natalie Cole were among his favorite songstresses. Bennie liked to play the lottery and bet on the ponies when he attended annual West Virginia State University fund-raisers at the racetrack with his alums.

Daughter Ericka described her dad, who stood 6-foot-1, as “an amazing father and provider who lived his life with honesty and integrity.” They spoke every day. “We kept up our tradition of going to the movies every single Saturday,” she said, a ritual they had begun when Ericka was a child.

In lieu of flowers, memorial contributions can be sent to St. Jude’s Children’s Research Hospital at https://www.stjude.org/.