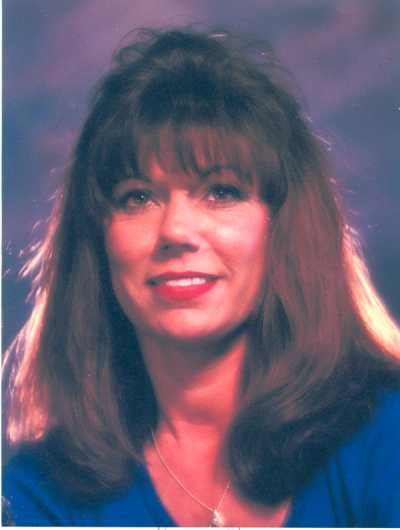 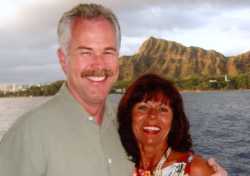 With a wry smile, Greg (pictured left with Elizabeth in Hawaii) said he actually envied the person who will inherit the corneas Lizzy, as he called his wife, donated prior to passing. “The lucky person who gets those eyes will spot BS ten miles away.”

Along with her immediate family-husband Greg; daughters Sabra (who is six-months pregnant with her first child, a boy) and Crichele, plus Elizabeth’s two-year-old grandson, Dylan-she prized her other family, the women she nurtured and counseled with a combination of tough talk and loving concern. “You bean head!” she would chastise, this the strongest language to issue from the lips of someone who had once used every curse word known to man, and then some. No longer.

“Legend” and “legacy” are words not often bandied about by those who have struggled insurmountable odds to regain sobriety; there are lots of heroes and heroines in Twelve Step. But in her seven years as a director at the treatment center-a total of 14 years sober-Elizabeth Campbell reached legendary status, her legacy compared to a sturdy tree blooming with healthy branches. An awful lot of folks credit Elizabeth with saving their lives, her husband said, saving their daughters’ lives, their mothers’ lives.

Yet, Elizabeth refused to take credit for anything. “It’s not about me,” she would say. “God did this.”

No one celebrated the day she was “reborn” into sobriety-July 22, 1994-more joyously than Lizzy. It was a long battle, one marked by a six-year absence from her husband and daughter while she fought to commit to one rehab after another. It all began in Garden Grove on October 1, 1960, when the future for the little brunette with the dazzling smile looked bleak. Born to alcoholic parents and a father who was never around, Elizabeth Aileen Grinstead somehow found her moorings amidst six brothers and two sisters. Dirt poor, moving from place to place, the family-even her mother-gravitated to the adorable child with the uncanny maturity. Later, Elizabeth would invite her ailing mother Sabra, whom she cared for until she died of a rare form of blood cancer, and her disabled brother Doug to live with her.

Eventually, like so many who grow up in similarly bleak situations, Elizabeth’s 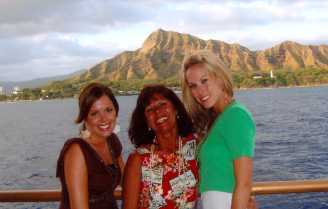 combination of genes and susceptibility drew her to drugs and alcohol. She was still fighting her demons when she met a married a dashing Garden Grove police officer, Greg Campbell, on July 7, 1984. They gave birth to Sabra (shown right with her mom) in 1985, and adopted daughter Crichele (on the left) in 1997.

While most such love stories crash and burn under the weight of addiction, Greg clung to his “for better or for worse” vows, and so did Elizabeth. During her six-year absence from her family, although she visited off and on, she stubbornly refused to fully reemerge in the role of wife and mother until she was certain she had triumphed over substance abuse, all the while supporting herself by running a coffee house, Java Jitters, in San Dimas. And then, in July of 1994, the lights went on. And they stayed on.

It seemed miraculous, this vibrant, laughing, sun-loving brunette with the flawless manicure, perfectly-applied fuchsia lipstick, chic Nordstrom labels and collection of shoes that outdid Imelda Marcus. At home she donned her PJs, of course, the seasonal flannels and spring cottons; she had scads of them. Her husband bought her diamonds, which sparkled against her tanned, olive skin; he whisked her off to her beloved Palm Springs, to Hawaii, any nearby beach, the Angels games. A superb softball player until she suffered a brain aneurysm in 1996 and could no longer play at the risk of seizures, “She could [still] throw a softball harder than any man,” Greg boasted.

Who was this Elizabeth? Oh, yes. Not all that different in temperament, actually. Quite the disciplinarian, the one who always cross-examined her daughters’ dates. “Who left the dishes in the sink?” she would call upon arriving home to find her spotless kitchen in disarray. “Get down here and put them in the dishwasher.” Elizabeth liked things organized.

And then there was the foot thing. Nervous leg syndrome. And when she was agitated, everyone knew it, because, boy, that right foot would “start quivering like a rattlesnake,” Greg said. But once reborn, Elizabeth was also a doer, filled with energy. She threw herself into AA meetings, pursued her California State counseling certificate, served as an intern and then case manager at Pacific Hills, and finally as Director of the Women’s Program.  (She is pictured here with sister Vicky Brown to her right and best buddy, Pastor Joann Scott, to her left).

Gretchen, The Psycho Dog from Hell

In 1997, the Campbells purchased a home in Aliso Viejo, and it was Elizabeth’s treasure, filled with color, both inside and out. “It was the first time she felt really safe,” said Greg, who planted big flower gardens for his wife each spring. Added to their family, a black Chihuahua named Gretchen. It was a “throw away dog, homeless and abused,” when Lizzy told Greg she wanted to bring the Chihuahua home. The two clearly had a bond. Except when Greg went to pet Gretchen, the dog nearly took his arm off. “I called her The Psycho Dog from Hell,” he said, smiling a little. Gretchen, who slept entwined between Elizabeth’s knees at night, died a year ago. Her ashes, Greg said, will accompany his wife into Heaven.

Elizabeth wasn’t perfect. Although the Campbell house drew droves for Thanksgiving, Christmas (her favorite holiday), birthdays and Sunday barbecues, she didn’t cook. Didn’t, couldn’t wouldn’t. It would be a potluck sort of thing. With seven siblings (one brother, Robert, died several years ago when he was struck down by a drunk driver) and numerous in-laws, cousins and such, the gatherings were raucous and sizeable. There were no feuds, just lots of debates. Euphoria when Dylan was born, absolute euphoria. Then the crushing disappointment of knowing she would not be here to greet her newest grandson.

She had rediscovered her Christian faith

To the delight of her best friend and pastor, Joann Scott, an ordained minister, Elizabeth rediscovered her Christian faith. Joann, who often stayed by Elizabeth’s side during her frequent hospital stays after she was diagnosed with lung cancer in December of 2007, marveled at her friend’s spirit. Despite great pain and suffering, “she was always so positive and hopeful,” Joann said. One of the pastor’s greatest “privileges” was reconnecting Elizabeth to God. “As a teenager, she had come to know the Lord as Savior, but she had not continued her search.” To see her friend blossom in that way was a delight, said Joann, who spent long hours interpreting the Scriptures with Elizabeth, a deeply curious soul. “We had no idea what was coming in the future. She needed that strength for herself and her family.”

Near the end, Lizzy made Greg promise to take the family to church on Sundays, provide for them, to never sell the house she loved so much, to keep her memory alive.

One suspects that won’t be hard.

For family and friends, a viewing is planned for Friday, July 25th, from 6 to 8 p.m. at McCormick & Son Mortuary, 25000 Moulton Parkway, Laguna Hills, 92653. Services, presided over by Pastor Joann Scott, will be held on Saturday, July 26th at 10 a.m. at Capo Beach Calvary Chapel, 25975 Comingo Avenue, Capistrano Beach, 92624, a reception to follow. Graveside services will be at El Toro Memorial Park in Lake Forest. Another Memorial Service, time and place to be announced, will be held in about two weeks.

In lieu of flowers, the family asks that contributions be sent in Elizabeth Campbell’s name to the Recovery Options Network, Inc., a non-profit organization that awards scholarships to women unable to afford treatment. The address is 32234 Paseo Adelanto, San Juan Capistrano, 92675. [KBL at www.ThePrecis.com]