The second of three children, Ronnie was born on September 6, 1961, in Stockton, to Harold Wayne Culver and Otoma Florence Smith, a housewife. Harold wore many hats: pilot, NASCAR-qualified driver, Sergeant in the Korean War, and owner of HR Transportation, a trucking company. The “H” in HR stood for Harold, the “R” for Ronald, a father and son business.

Father and Son played music together 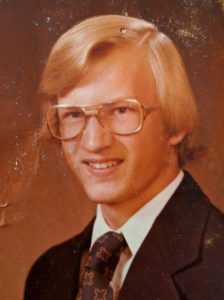 Ronnie worked for his dad as a service mechanic from 1975-79. He loved that Harold could fly him to Catalina and actually land a plane on that tiny island. His dad also introduced him to music and the guitar, and the two would play together.

In 1979, after graduating from East Union High in Manteca, which is where he grew up, Ronnie joined the Longshoreman’s Union and worked on the docks at the Port of Stockton. He followed that with a job as a machine operator at a cheese company, Leprino Foods. Later, he drove a truck for Swift Trucking, which honored him with a One-Million Safe Miles Award. 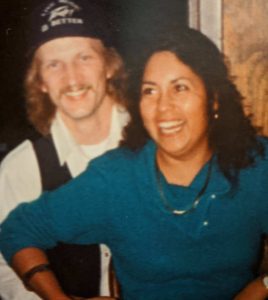 Ronnie met Rosemary Sandoval at East Union, and they married in Reno, NV, on Nov. 24, 1979, right after high school. Tragedy stuck in 1980 with the death of his father, Harold. Just eighteen, Ronnie was devastated. Good news arrived in 1981 with the birth of the Culver twins, David and Jennifer. But the loss of his dad haunted Ronnie for years.

The Culver family lived with Rosemary’s parents on an acre of land in Lathrop Acres, CA for a decade. When Rosemary’s mother died in 1991, they moved to the Parkview Apartments in Manteca. Ronnie liked to barbecue and to take the twins to Mountain Mike’s Pizza, the San Joaquin County Fairgrounds, and to music acts in Stockton.

Felt closer to God in a big field

Ronnie wasn’t religious, but he paid heed when the twins started attending Sunday School at the Pentecostal Church next door to their apartment building. Still, he always said he felt closer to God when standing outside in a big field.

But Ronnie’s real passion was music and playing lead guitar with his Silver Wings band. Rosemary, as manager, booked gigs, and Ronnie selected his bandmates, the songs, and did the arrangements. He had an extensive music collection and listened to singers such as Buddy Holly and U2 and everything in between. His favorite country singers included Ray Price, George Strait, Clint Black, Allan Jackson, Dwight Yocum, Buck Owens, and Roy Orbison.

David recalls his dad playing the distinctive bass line to Orbison’s Pretty Woman on his guitar over and over. He was equally interested in 80s music, The Cars, Dire Straits, and the Steve Miller Band.

Ronnie relished all the mandatory country western apparel, the cowboy hats, boots, vests, string ties. Just 5-feet-6, he was slender as a youth but study of build in later life, with a white goatee and glasses—until he got Lasik eye surgery. For leisure, he wore khakis or shorts, a polo shirt, and always a  baseball cap.

Although Ronnie’s relationship with his kin was distant, he was close to his older sister, Theresa, who was handicapped. As her major caregiver, he arranged for her to have her own apartment, showered her with love and affection, and saw to her every need as best he could.

“Bein’ on the quick” 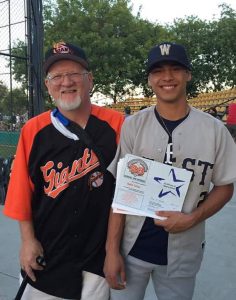 As far as Ronnie himself, he was full of humor, fun facts, and easy to talk to. Talking, in fact, was his thing. He was the epitome of the old saw, “You can’t get a truckdriver to shut up.” He had an opinion on anything and everything, his son said. Ronnie was also famous for his snappy comebacks. He called it “Bein’ on the quick.”

One thing that made Ronnie burst with pride was his grandson Gabriel Culver (shown right), Jennifer’s son, whose prowess on the baseball field landed him in the Little League Hall of Fame at Cooperstown. Young Gabriel’s feat was to hit three grand slams in one game.

Along with music, Ronnie loved the Oakland Raiders, NASCAR, baseball, and never missed the Manteca Pumpkin Festival. He was all into 60s TV shows like Star Trek, Lost in Space, Gun Smoke, and horror movies that he called “creature features.” Westerns with John Wayne were his favorites, and he was fond of old comedies, especially Red Skelton and Dean Martin roasts. His favorite foods were tacos and spaghetti.

Although Ronnie and Rosemary’s marriage lasted twenty years, they eventually parted but remained close friends until the end.

Later in life Ronnie accrued health problems, including a quadruple bypass six years ago. It knocked the wind out of him, literally. To get his lungs in shape, he started singing, and karaoke soon took over his

nightlife. Instead of playing music before an audience, he sang for one, first at the Tracy Senior Center, where a “karaoke family” soon had him trotting from one event to another. The woman running karaoke at Tracy admired Ronnie’s voice, his timing, the way he struck every note. 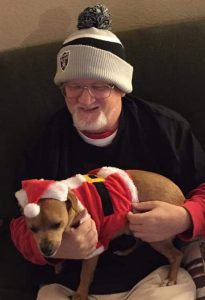 He was to undergo a routine surgery when he walked into St. Joseph’s Memorial Hospital. He never walked out. Due to COVID-19, David and Jennifer were only allowed in for an hour each to say goodbye. They were there when he passed. One thought on “RONALD WAYNE CULVER”