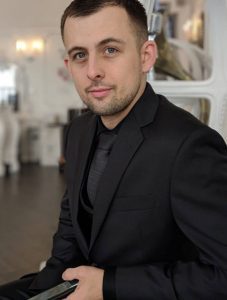 Scott Erritt Shy—a highly decorated petty officer in the U.S. Navy, whose happy-go-lucky nature and dedication to service inspired everyone he knew—died suddenly while based at the Naval Air Station in Lemoore, CA.

At just twenty-eight, he was gone too soon.

His future limitless, Scott was still a young man who loved Marvel movies, Harry Potter books, and his Batman watch. Perhaps due his fondness of military planes, he wanted to join the Navy and did so on April 27, 2010.

Attached to Striker Fighter Squadron TWO (VFA-2), also known as the “Bounty Hunters”, Scott found it amusing that the squadron’s call sign was “Bullet”, a unit made up of a wide array of aircraft performing a variety of combat and support missions that deploy aboard the USS Carl Vinson. He was an Aviation Machinist’s Mate Second Class (AW), one who amassed accommodations in his short career and was quickly promoted.

Scott, the first of two sons, was born to Lisa (Bauer) and Raymond Shy, on Oct. 1, 1990, in Jacksonville, North Carolina. Scott was

nicknamed “Scooter” by his maternal grandfather because—before the boy learned to walk—he used a baby walker to whiz all over the house.

Lisa, Scotty, and younger brother Michael moved to New York when Scotty was four.  But it was Lisa’s second marriage to Yama Osmanzai that brought a real father into both Scott and Michael’s lives. Scott was twelve at the time. Another brother, David Osmanzai, and two sisters, Tahmina and Ariana Osmanzai, came along, completing the loving, rambunctious family. The children grew up in Castleton-On Hudson, NY.

A special wisdom about him

When Michael and Scotty were small, they would disagree about who got what toy. Scotty was almost always the one who would back down to keep the peace. Even then he had a special wisdom about him, a maturity in those dark-blue eyes, eyes that reflected that quick, beautiful smile.

And then there was his innate humor. When he was little, he used to love it when his Aunt Jennifer Borthwick read Dr. Seuss books to him. He would always tell her to read faster and faster because he loved it when she got tongue-tied.

Later, Scott’s sense of humor characteristically bubbled up with his siblings. An animal lover, he shared a cat, Munchie, with his sister, Tahmina, and they would playfully argue who owned what end of the cat (front vs back). The back end had to do with the litter box.

But Scotty was always a quiet, deep thinker, even as a child. At age five, he mistook elephants’ trunks for tails and told his aunt he felt so sorry for them because “God put the tails” on the wrong side. On walks around the neighborhood, his aunt said, he would contemplate the trees and ask intelligent questions.

Proved his worth on the wrestling team

Scott attended Maple Hill High School and proved his worth on the wrestling team. He also cherished his first dog, a Golden Retriever, and Lassie, a Collie, natch. Artistic and creative, he loved to draw anime characters, those taken from Japanese animation and characterized by colorful graphics, vibrant characters, and fantastical themes. He also relished hiking, rock climbing, video games, Batman and John Wick films. Fried chicken was his favorite food, and he liked to snack on Candy Corn.

At 5-foot-11, Scott was an extremely fit 165 pounds, the result of going to the gym daily. With dark hair, blue, smiling eyes, and a carefully maintained beard, he had a deep, resounding voice, and when it dropped a few octaves, his siblings knew to run for their lives. Scrupulous about his body, his room was a mess growing up, Pokémon cards strewn all over the place.

That doesn’t mean he didn’t give the family heart-stopping moments as a youngster! For the longest time, his obsession with Batman drove him to wear a cape and jump off of beds, chairs, anything. He was convinced that his cape would help him fly.

Held on to the whimsical side of childhood

As an adult, Scott actually purchased a full-size Batman costume and displayed it in his apartment. He held on to the joy and whimsical side of childhood at the same time he matured into a strong, amazing young man.

One summer, when he was younger and living at home, there was a terrible storm and the stream in back of the house got flooded. He decided he and his siblings should go white-water rafting down what was now a river. Scott and his sister Tahmina talked Mike into getting on a raft by telling him that they had done it before.

But the currents were so strong that they ended up crashing into the other side of the riverbed. They had to cross over downed trees, the raft turned over, and Scott and Tahmina both lost their shoes. Mike had his shoes, but Scott tried to swipe them.

The kids all love to tell that story.

Aside from his family, Scott was proudest of the numerous awards and accommodations bestowed on him by his beloved Navy—some twenty in all.

Most recently, he was awarded the Navy and Marine Corps Achievement Medal by the Secretary of the Navy, who named Scott the “2017 Troubleshooter of the Year” for his “exceptional technical skill and leadership” in correcting maintenance discrepancies on the F/A-18 Super Hornet, ensuring the successful execution of 16,896 mishap-free flight hours.

Scotty liked that he had charted his own path. He tried college but didn’t feel it was right for him.  Joining the military and getting his own paycheck was something he never took for granted. He loved the Navy. He was so proud of the skills he learned and that he could take complete ownership of his accomplishments.

But he always knew how to have fun. Take X-Box. His favorite online game was Battlefield, and his gamer tag was General Saltine. He would play with his brother Michael, his uncle Scott, and his two nephews, Zackery and Andrew. It was wonderful, his aunt Jennifer said, because, even though we were geographically far away from Scotty, everyone got a chance to play and laugh together.

Scott also loved playing online with his brother David.  This was his opportunity to cultivate a close and special relationship with him.  Whenever a new game came out, Scott always saw to it that David got it as well. Scott’s younger sister, Ariana, remembers him as a role model. She was seven years younger and always looked up to him.

While he had dreams and hopes for the future, Scotty was one of the most level-headed and grounded people on earth.  He spent more time enjoying what he had instead of hoping for something in the future.

He always wanted to go to Japan

He enjoyed trying craft beers, and got the travel bug, visiting Puerto Rico, Vietnam and Hawaii. One thing he always wanted to do was go to Japan. He never made it. He passed up one opportunity to stay close to loved ones.

Still grief-stricken and in shock, his mom Lisa remembers her first born as “always smiling.”  He never got into trouble, she said, was utterly trustworthy, and monetary things never mattered to him.

One thought on “SCOTT ERRITT SHY”