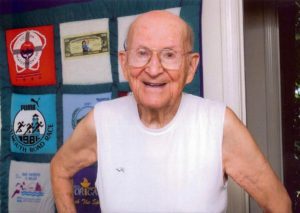 He lived life to the fullest and then some

[Editor’s Note: Although William passed away a few years ago, we wanted to post a special tribute to this remarkable man.]

He ran marathons, climbed the highest peaks, played a funky trombone, and soared in the field of chemical engineering. A WWII veteran, William Rogers Stern, who worshipped his wife of 62 years, Helen, and their four children, passed away in Bedford, MA, on February 21, 2018. He was 99.

To say William, “Bill” to most, lived life to the fullest and then some, couldn’t be more apt.

It wasn’t just the super-human physical endeavors, such as winning three medals at the age of ninety in the Summer National Senior Games at Stanford University, and completing the torturous seven-mile run up Mt. Washington a couple times. Or the academic achievements, such as earning chemical engineering degrees from MIT and training as a WWII radar specialist at Harvard, not to mention membership in two honor societies. Or the professional accomplishments, such as engineering innovative products that improved automotive safety and higher reliability of airport data.

Bill also possessed something many an engineer lacks: a crackling sense of humor.

One of his favorite stories concerned a business trip he took to New York from Lexington, where he lived with his late wife Helen. His wife had packed a sandwich and banana for him to eat on the plane. While waiting to board the shuttle to La Guardia, he put the food in his briefcase, then sent it through the X-ray scanner.

The scanner detected a handgun! Bill was pulled aside, his briefcase carefully opened, and lo and behold, the gun was a banana.

“I may hold the record for carrying the only unregistered banana aboard an aircraft!” he proudly boasted after that.

Another favorite story was overhearing two young ladies chatting about their war-time social life in 1943, and one chirping: “We had champagne and caviar, and you know what, caviar ain’t nuthin’ but fish eggs!”

One of two sons, Bill was born on February 2, 1919, in Cleveland, OH. His father, Leopold Stern, was a dentist, his mother Jessie, a homemaker. 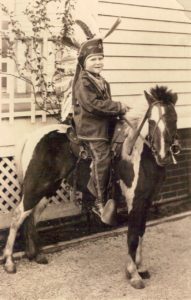 A superb student, he grew up in Cleveland Heights, joined the Boy Scouts, and loved music, baseball, swimming and model airplanes. He kept two pictures on his wall at home: one of Old Ironsides sailing the ocean blue, and one of “the Lone Eagle, (Lucky Lindy) Charles Lindbergh, his hero.

A member of a championship marching band in high school, Bill played trumpet—until the day he was handed a trombone and asked to march and play in the front row.

“OK,” he said. “But I have never played the trombone.” He was told: “Just fake it.” By the time the parade ended, “I had learned to play the trombone.”

He also recalled playing trumpet for a high school musical when a stranger sat down beside him. The man told Bill that his ticket had “Orchestra” printed on it. The stranger remained alongside Bill throughout the show.

Earning 35-cents an hour at GE 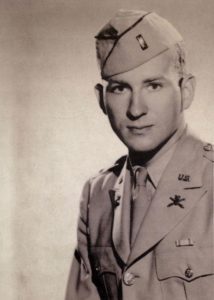 In 1940, Bill earned his BS degree in chemical engineering from MIT, where he was an active and enthusiastic member of Sigma Chi fraternity, as well as Tau Beta Pi and Sigma Xi honorary societies. He received his U.S. Army officer’s commission through the MIT ROTC program, and an invite to join Scabbard and Blade, an honorary military society.

He fondly recalled a summer job at General Electric in Ohio, making tungsten filaments and various gases for the standard minimum wage of 35-cents an hour. “I was like a kid in a candy shop,” he said. MIT courses had helped him develop a hunger to understand how things worked.

After presenting a lecture to employees about gas laws and their pressure, volume and temperature relationships—things he had just learned in “Physics 801” at school—he was asked to see the manager, who expressed his pride at having “such intelligent guys working on the factory floor.” He then proceeded to apologize for not being able to offer him a raise.

Out in left field

Asked what he’d like instead, Bill answered right off the bat (pun intended) to play “left field” on GE’s Argon Baseball Team. As a summer employee, Bill wasn’t allowed to join. Due to the manager, Bill nailed left field for the remaining few weeks before he returned to MIT.

He often wondered if the manager, who went on to head GE, ever told the story as “an illustration that man does not work for bread alone.”

Earning his Masters in 1941, Bill served in the army from Sept. 1941 to May 1946. After further training at Harvard and MIT, he became a radar specialist, first in Rhode Island, and then in the Alaskan Defense Command, both on the mainland and in the Aleutian Islands.

He often told how he learned of the attack on Pearl Harbor on Dec. 7, 1941. He was on-duty Officer Of The Day at Fort Wetherell, RI, “on that yucky, wintery day,” when he heard the radio announcement of the Japanese bombings. “We imagined an attack coming upon us there at Narragansett Bay.”

After the war, Bill joined with several veterans in a start-up [engineering] company in Waco, TX. “There my business associate introduced me to his cousin, Helen. We met and instantly the angels began singing; they sang the sweetest music I ever heard.”

Bill and his adorable brunette bride were married on Oct. 29, 1946, and, in 1961, moved to Lexington, MA, where they raised four children, Roger, Sally, John and Laura.

Bill spent most of his distinguished career developing marketing sensors and measuring instrumentation. He led his associates into developing new products to meet the ever-changing advancements in science and industry, including improved automotive safety, higher reliability airport data, and advanced electronic air-conditioning controls.

In 1970, he teamed up with two MIT professors to guide the successful growth of the start-up Setra Systems, Inc., which designed and manufactured sensors and controls. He retired as Marketing Vice President in 1986, but hardly slowed down. 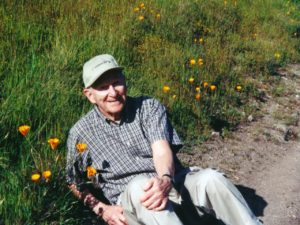 For leisure, along with trips to the Boston Symphony, Museum of Fine Art and Museum of Science, both Sterns loved to hike in the White Mountains; Bill, a life member of the Appalachian Mountain Club, had climbed all the 4,000-footers (altitude) by 1978.

He became an active runner in 1982, and a member of the New England 65-Plus Runners Club. The Sterns moved to the Carleton-Willard Village retirement community in Bedford, MA, in 2005. 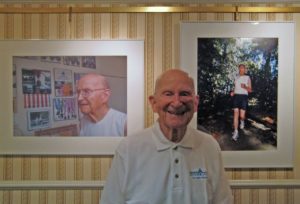 Bill faithfully jogged 35 to 45 miles each week and, at the “young age of 67” decided the 90th Boston Marathon was ripe pickings. The day was perfect, 60-degrees with a slight drizzle. The start gun went off at noon, and six minutes later, Bill had advanced to the start line with 5,000 or so other runners.

The cheers of the crowd energized him, up to about the 16-mile mark, where his support team, wife Helen and daughter Sally, greeted him—in case he wanted to quit.

Foaming at the Feet

“I felt fine, but my quadriceps refused to run any further.” He walked on, nonetheless. “When I turned onto Boylston Street, the finish line came into sight and pulled me forward like a magnet.” It took him four hours and 56 minutes to complete the race.

For another race, in 1991, Bill donned some track shoes he had washed with a running shoe cleaner. “I thought I had rinsed them,” he said. It was a “wettish” day on the roadway, and his shoes started pumping air in and out. When he looked down, he saw foamy lather bubbling up from his shoes.

“That was the first and last time I ever was foaming at the feet!” he joyfully exclaimed. 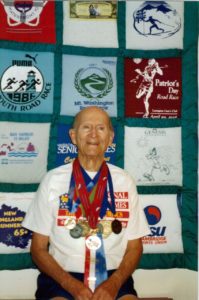 Prevalent in the Sterns’ spacious Falmouth Court home in Bedford—along with the Georgia oak rocking chair, colored glass vases, and baby grand piano with a room all its own—was a handmade quilt Bill received from his kids on his 80th birthday.

The quilt, which hung on the wall, features squares made from Bill’s athletic shirts, each with an insignia representing his various teams, clubs, and races.

Listen to the wind

One of the Sterns’ most cherished trips was a two-week Elderhostel program in Hawaii, on Oahu, Kauai, and Maui. They studied the music, history and culture of the islands, and it was love at first sight for both. Bill even wrote a song about it:

The couple also spent joyous vacations at Cold River Camp in the White Mountain National Forest. Bill recalled eight-year-old Laura sitting on his lap on July 20, 1969, as they watched astronauts walk on the Moon. The Sterns were also part of a group of regular visitors who joined forces to prohibit a 70-ft. damn from marring the beautiful wooded landscape.

Although Bill’s beloved Helen passed away in 2008, the music still played in his heart.

At age ninety, and a proud member of the Cambridge Sports Union run club, he was set to compete in the Summer National Senior Games at Stanford University. He medaled in the 100, 200, and 1,500 meter distances.

In 1995, when Bill was diagnosed with prostate cancer, his doctors said that “his commitment to physical fitness and living such a full and active life…contributed to his ability to beat the disease.”

One thought on “WILLIAM ROGERS STERN”